For Sale - One Bedroom Executive Flat - Lagos (NGN37m)
✅ NEW - car park, swimming pool, 24 hours light/security and more.
Ad
Rivers State Governor, Rotimi Amaechi has blamed his alleged refusal to give the first lady, Patience Jonathan money from the state treasury as the reason for the sudden re-surge of militancy in the state.

According to THIS DAY, speaking during the joint graduation of students of University of Ibadan and Pioneer graduands of Ignatius Ajuru University of Education held at Rumuolumeni, in Port Harcourt.Amaechi said, "Remember, when I became governor, I fought militancy. Right there where you built a new house, there used to be a hole where they pass into the river and escape. The security report reached me and I came here and chased the militants away. I asked them to fence the school premises and block that hole. I have to protect you because, it is my responsibility. Some of the militants went to Lagos, Ivory Coast, Ghana etc.

"Today, they are back because the wife of the President brought them back to protest against me. I refused to give them money in Abuja because if I do that, I won’t be able to carry out any development project or finish the road from Rumuolumeni to Rumuepirikom. The quarrel between me and the wife of the President is because she said I should bring your money, Rivers people money and share with her"

"Now that, you are graduates, you are now eligible voters that can use your voters’ card to change society. Ask yourselves this question that I have always asked Rivers people. What have we (Rivers people) done to President Jonathan that he has refused to bring any project to Rivers State. We had to fight them before they could do the East-West road. I had to abuse the federal government and they abused me back, before they could do the work you now see on that road. Our President, from the South-South has taken our oil wells from Soku in Rivers State to Bayelsa State. What about the 41 oil wells in Etche that was given to Abia State? Is the President or his wife from Abia State? Why do they want us to suffer? If President Jonathan comes back to power in 2015, Rivers State economy will crash", Amaechi said. 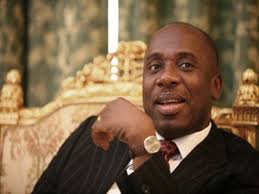