For Sale - One Bedroom Executive Flat - Lagos (NGN37m)
✅ NEW - car park, swimming pool, 24 hours light/security and more.
Ad
Angelina Jolie, popular Hollywood actress and Tomb Raider star has been officially honoured and made a dame during her meeting with the Queen of at England Buckingham Palace where she was awarded her honorary damehood for services to UK foreign policy and the campaign to end war zone sexual violence.

Jolie, 39, received the insignia of an Honorary Dame Grand Cross of the Most Distinguished Order of St Michael and St George earlier today during a private audience at Buckingham Palace.

It is interesting to note that Jolie was was recognised in the Queen's Birthday Honours earlier this year.

The actress is a special envoy for the UN High Commissioner for Refugees and co-founded the Preventing Sexual Violence Initiative (PSVI) in 2012. 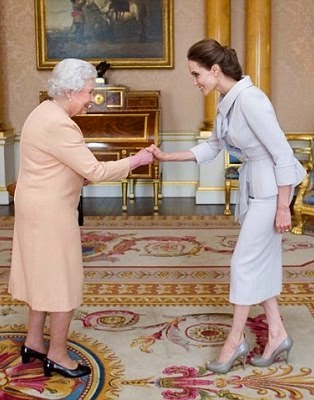