For Sale - One Bedroom Executive Flat - Lagos (NGN37m)
✅ NEW - car park, swimming pool, 24 hours light/security and more.
Ad
The Federal High Court in Abuja will on April 25 decide whether or not to grant Nnamdi Kanu,
leader of the Indigenous People of Biafra, IPOB, bail. 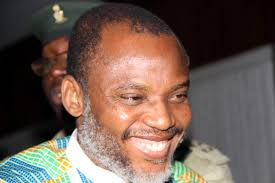 VANGUARD reports that trial Justice Binta Nyako also ruled that witnesses will testify behind a screen and are allowed to use pseudo names. The court however, agreed to that the defendants and their lawyers would be allowed to see the witnesses even though they're masked from the public.

Kanu had insisted that he would want the public and members of the press to be allowed to see faces of those testifying against him.

Nnadi you never tell us what you need!!! are you looking for firm in future or just them to settle your in future