A letter from the president notifying lawmakers of the “corrections” was read Tuesday by the senate president, Bukola Saraki, during senate plenary.

A document containing the corrections was attached to the letter.

The president in his letter said the “draft bill remains the same and there are no changes in figures”. 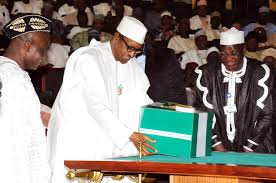 The letter reads: ‪“It will be recalled that on Tuesday, 22 December, 2015, I presented my 2016 budget proposals to the joint sitting of the national assembly. I submitted a draft bill accompanied by a schedule of details".

“At the time of submission, we indicated that because the details had just been produced, we would have had to check to ensure that there were no errors in the detailed breakdown contained in the schedule.

“That has since been completed and I understand that the corrections have been submitted."

Mr. Saraki asked the Senate Leader, Ali Ndume, to ensure the copies of the corrected document are circulated today, Tuesday, so that the Senate will start debate on Wednesday.