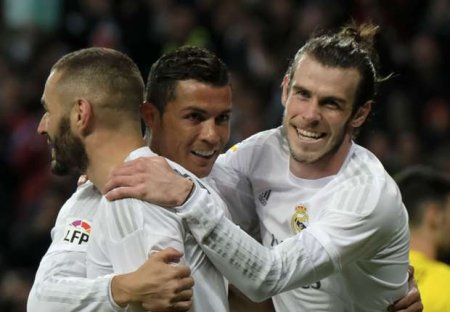 The BBC trident scored 71 per cent of Real Madrid's 110 goals in La Liga this season and, despite injury worries surrounding top scorer Ronaldo, all three will line up against their archrivals who conceded just 18 times in the Spanish top flight.

With Raphael Varane unavailable and Alvaro Arbeloa having played just a bit-part role in the first-team this season, there are expected to be five changes to the Blancos side that came from behind to beat Atleti 4-1 after extra-time in the 2014 in Lisbon.

Keylor Navas, Pepe, Marcelo, Toni Kroos and Casemiro are all expected to start against Diego Simeone's men, while Sergio Ramos, Dani Carvajal and Luka Modric all start alongside the three star attackers in their second final in three years.