Curators
FREE Nigerian Business Directory
✅ NEW - get your business listed and your information shared across social media.
Ad
Residents of Nakuru’s Tanners in Kenya have again caught a 55-year-old man stuck in bed while having sex with his sister-in-law at a hotel in the town. 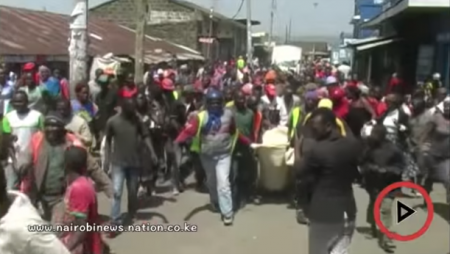 According to Nairobi News, the father of five had left his home in Kisii supposedly on a trip to Mombasa to purchase a family car after selling a piece of land only to end up in a hotel in Nakuru with his sister-in-law, who is a student.

After a night of marathon sex, things suddenly turned sour for the two lovebirds when they attempted to disengage themselves and they couldn’t.

The hotel management broke the door of their hotel room when they cried out loud in pain, and saw the pair stuck to each other.

As word disseminated around the neighborhood, hundreds of people stormed the hotel including the man’s wife who claimed that she had charmed her husband to expose him.

According to the reports, the woman at first demanded to be paid some ‘good amount of money’ before she could separate the busted couple. She, however, agreed to have them taken to the witch doctor for separation.

The love birds were paraded in bed sheets to where the witchdoctor, who identified herself as Annet Mutheu intervened.

On arrival at Mutheu’s place, Nabwire’s sister pleaded for her mercy screaming,

Ms. Margaret Nabwire, said she took the drastic measure of seeking the services of a witchdoctor after neighbors told her that her husband has been cheating on her.

“I have been married to him for more than 20 years and we have five children. Today, l decided to teach him a lesson. I paid the witch doctor Sh 40,000 for assistance,” the crying mother said.

Before the separation, the witchdoctor directed the lovers to ask for forgiveness and after they pleaded guilty, she untied two huge pencil-shaped stick and the man breathed a sigh of relief while shouting, “Thank you, my wife, thank you.”

The witch-doctor said she uses ‘kamuti’ with names of either the wife or husband and ties it with a string until the cheating spouse is caught.

It can only be Kenya

What a shame. That man no go try am next time.
L

I like that witch Doctor. She's chubby, articulate and has a sing-song voice as well.

She should come to Nigeria. Business plentyyy here.
B

Lequte said:
I like that witch Doctor. She's chubby, articulate and has a sing-song voice as well.

She should come to Nigeria. Business plentyyy here.
Click to expand...

that served them right

That served them right
D

Nemesis at work. Next go try am. He goat.
U

Khaleesi Dragonfire said:
It can only be Kenya
Click to expand...

Never hapun in 9ja be4
Y

Wonders shall never end ooooooo
A

That juju strong o
You must log in or register to reply here.