Business eBay to Spin Off PayPal into a Separate Company

For Sale - One Bedroom Executive Flat - Lagos (NGN37m)
✅ NEW - car park, swimming pool, 24 hours light/security and more.
Ad
eBay Inc., the online auction site in a reversal strategy is planning to split off its payments system PayPal into a separate company in the second half of 2015, a statement on its website says.

According to EBay's chief executive John Donahoe "a thorough strategic review... shows that keeping eBay and PayPal together beyond 2015 clearly becomes less advantageous to each business strategically and competitively."

PayPal's revenues are growing at 19% a year, twice as quickly as eBay's.

Earlier this year the activist investor, Carl Icahn, began pressing for eBay to sell PayPal, a plan that was resisted by the eBay board. He stopped pushing after failing to gain enough support. 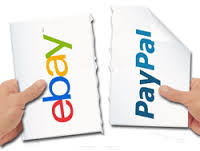 May 28, 2020
ese
E
K
Metro FG Orders JAMB To Use Separate Cut-off Marks For Universities, Others