Curators
FREE Nigerian Business Directory
✅ NEW - get your business listed and your information shared across social media.
Ad
The Economic and Financial Crimes Commission has frozen five bank accounts traced to a former Deputy Governor of Osun State, Senator Iyiola Omisore, and the two sons of a former Minister of State of Defence, Senator Musiliu Obanikoro. 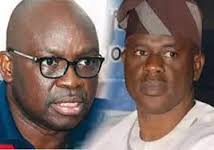 According to Punch, the EFCC froze the accounts as part of investigations into the N4.7bn diverted from the imprest account of the Office of the National Security Adviser under the leadership of the former NSA, Lt. Col. Sambo Dasuki (retd.).

Punch reported last week that Sylvan McNamara, a company at which Obanikoro’s two sons- Gbolahan and Babajide – were directors, received N4.7bn from the ONSA in 2014.

About N1.3bn was said to have been transferred to Omisore.

Omisore, who has since been declared wanted by the anti-graft agency, allegedly received the funds in four tranches from Sylvan McNamara between July and August 2014, a few weeks before the Osun State governorship election which he lost.