Ekiti State Governor, Mr. Ayodele Fayose has commended workers in the country for their resilience in the face of biting economic situation, promising that the future holds better prospects for employers and employees.

In a message released to the press by his Chief Press Secretary, Mr. Idowu Adelusi in Ado Ekiti, Saturday; the governor noted that the prevailing economic situation must also not be allowed to cause disharmony between the organised labour and the government.

To workers in Ekiti State, Fayose said ever since he assumed office for a second term, he had allowed labour leaders and other critical stakeholders access to the financial books of the state in the bid to ensure transparency in government.

“To my great workers in Ekiti State, I appreciate you. During our first term in office, you know we used to pay salaries before the 25th of every month. 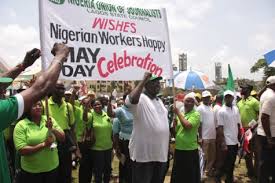 “When I came back into office in October 2014 and met the poor financial situation our state was plunged into by our predecessors, we still made efforts at being alive to our responsibilities by ensuring regular payment of salaries and other entitlements, until even when two months allocations from Abuja became grossly insufficient to pay a month salary.

Notwithstanding the dwindling allocations to the state, the huge debt obligations we inherited and the near zero industrial base of the state, which means poor internally generated revenue, we are still better.

“Our administration has not hidden all necessary facts about our finances from labour and we cannot but appreciate your understanding and support in this critical period. All hope is not lost, as there is a silver lining ahead,” he explained.
PLACE YOUR ADVERT HERE
Connect with people interested in education, social, crime and health News!