Facts have emerged about the Power tussle behind Buhari’s super ministers’ appointments on Wednesday.

PUNCH reliably gathered on Friday that before the allocation of portfolios, the President was faced with the two options of continuous reliance on politicians and building his own political base across the country.

A close associate of the President, who confided in one of our correspondents, said that Buhari opted for the latter and decided to saddle his allies in the All Progressives Congress with “more tasking ministries.”

It was learnt that the President in a bid to build his own political network and strengthen his base, decided to give more responsibilities to his allies.

Apart from favouring his long time allies, Saturday PUNCH learnt that the President had more or less adopted former governors Babatunde Fashola and Dr. Kayode Fayemi as his godsons. It will be recalled that Buhari, who was not regarded as an experienced politician, relied on the support of chieftains, including Asiwaju Bola Tinubu; to emerge as the APC presidential candidate at the December 10 presidential primary of the party in Lagos.

It was learnt that as part of the power play, there was subtle lobby by some party leaders before the allocation of the portfolios.

It was gathered that some leaders of the party had expected that experienced politicians, who played key roles in Buhari’s emergence as the APC presidential primary, would get more tasking ministries than those given to them.

Senator Chris Ngige, a strong supporter of the President at the convention, was assigned the portfolio of Labour and Employment.

Also Ogbonnaya Onu, a former Chairman of the All Nigeria Peoples Party is heading the Ministry of Science and Technology, while an ex-Chief of Army Staff, Gen. Abdulrahman Dambazzau, who headed the convention’s security committee is the Minister of Interior.

The Presidency source said that although it was too early to talk about the President’s ambition in 2019, it was normal for Buhari to use his power in strengthening his network across the country.

This, the source explained, partly informed allocation of sensitive portfolios to those who were with Buhari in the ANPP and went with him to form the Congress for Progressive Change.

Fashola is the Minister of Power, Works and Housing while Fayemi is in charge of Solid Minerals.

The APC chieftain noted that the duo were more or less becoming Buhari’s godsons in spite of campaign against their appointments, especially Fashola’s, in the South-West, their zone.

Explaining the influence of Buhari’s allies from his days in the ANPP and the CPC, a Presidency source cited the Minister of Communication, Mr. Adebayo Shittu. 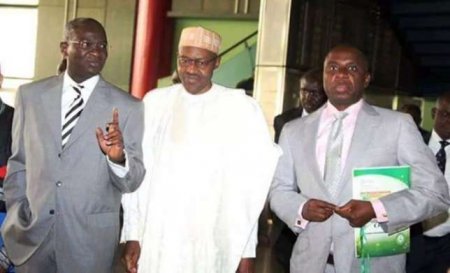 Shittu was the CPC governorship candidate in Oyo State in 2011. It was gathered that when CPC merged with other parties to form the APC, Shittu joined the new party because of his belief in Buhari.

Some members of the CPC, who joined the APC, were said to have left the new party over alleged marginalisation.

The Presidency source said that Shittu refused to leave the APC because of Buhari.

It will be recalled that the Oyo State APC kicked against the nomination of Shittu on the grounds that he was not a team worker, an allegation the minister denied.

It was learnt that not many chieftains of the party had expected that Shittu would be made a substantive minister.

It was also gathered that some chieftains of the party had expected Anthony Onwuka, a professor of education and associate of the Imo State Governor, Chief Rochas Okorocha, would be made a substantive minister, but the President opted for Adamu Adamu.

Besides being an associate of the President, Adamu was said to have worked closely with Buhari in the defunct Petroleum Trust Fund.

The Presidency source, who confided in Saturday PUNCH, said, “You will see that the President is gradually building his own political network. It is a matter of giving great responsiblities to your long time allies.”

A chieftain of the party in the South-West, who further threw light on the allocation of the portfolios, said the President had clearly shown that he was appreciative of the support he got in the zone in the 2015 elections.

He noted that Buhari was building his own political base in the zone. Such influence will be independent of party chieftains in the zone.

He said, “The appointments of Fashola and Fayemi fall into this category. They are also part of the efforts of the President to show appreciation to the South-West.

“He also believes that if any of these appointees performs creditably, Buhari will not need anybody to campaign for him or any candidate he supports in 2019.”

It was learnt that the Ogun State Governor, Senator Ibikunle Amosun’s closeness to Buhari was instrumental to the emergence of Mrs. Kemi Adeosun as finance minister.

The APC chieftain, who expressed concern about the crisis in the party, said that three power blocks had emerged in the party.

He said besides the emerging Buhari block, Tinubu and Saraki/Atiku camps had existed in the party.

Atiku was reported to have supported Senator Bukola Saraki to emerge as the Senate President against Senator Ahmad Lawan, the preferred candidate of other APC chieftains, including Tinubu.

But contrary to the claim that he was not comfortable with Buhari’s ministerial list, Tinubu on Thursday said the cabinet would perform.