Politics Fani-Kayode : I Know Buhari Is Not Done With Me

FREE Nigerian Business Directory
✅ NEW - get your business listed and your information shared across social media.
Ad
Femi Fani-Kayode, Nigeria's former aviation minister believes that his trial his political. The PDP Chieftain has written a new piece to buttress his point. 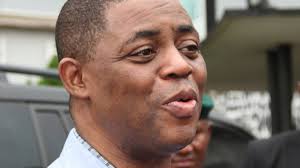 I have chosen to share my views about our nation today because I am aware of the fact that President Buhari has not finished with me yet and I may be picked up and thrown into detention on other trumped up charges very soon. This government will do and say anything to silence my voice but they shall not prevail.

Forgive me for my curious silence over the last few months but this was due to circumstances beyond my control.

As you know I was locked up in President Buhari's gulag and I was not allowed to write from there.
Needless to say I missed all my readers. I have chosen to share my views about our nation today because I am aware of the fact that President Buhari has not finished with me yet and I may be picked up and thrown into detention on other trumped up charges very soon. This government will do and say anything to silence my voice but they shall not prevail.

Whatever the case my safety, life and future lies in the hands of God and not theirs. Despite the obvious dangers and various warnings that I have received from both my persecutors and well-wishers I shall continue to write as long as God gives me life and liberty.

It is not what happens to me that matters but rather what happens to Nigeria and the millions of ordinary people that are suffering in our country from the daily oppression of our modern-day slave masters. That aside, permit me to share my views.

A couple of weeks ago a 73 year old Christian grandmother was beheaded in Kano because she asked some muslims to stop washing their feet in front of her door before their prayers.

A few days later a female pastor of the Redeemed Church of God was hacked to pieces by a mob of muslims in the Kubwa district of Abuja simply for doing her morning cry of evangelism and urging the people to give their lives to Christ.

Not too long after that two hundred muslim youths burnt down a Catholic Church and attacked worshippers in Niger state claiming that they had no right to go to church on a friday because it was the muslim day of worship.

A few days later a Christian traditional ruler in Plateau state was matcheted to death by a group of Muslim militants and Fulani herdsmen.

Such attacks are now common place in our country and they are no longer isolated events.
Worse still cases of institutional racism and religious bigotry are on the rise because our government appears to be encouraging it. Permit me to share one example.

During my prolonged detention at the EFCC a group of cell mates were conducting an all night christian prayer. All of a sudden the cell guards burst in and screamed at them saying that this "nonsense" must stop and they must go to sleep immediately.

The inmates complied sheepishly out of fear and the prayers stopped. It was one a.m. in the morning. I was in the opposite set of cells but I heard all the noise and warnings of the guards.
I sent for one of them and I asked him why he stopped the inmates from doing an all night prayer. His response was that that was efcc policy because the prayers were too loud and they may be planning an escape. I told him that all he had to do was to ask them to lower their voices.
And that God and prayer was all they had. I also told him that if the inmates that were praying
were muslims he would not have ordered them to stop. He stormed off in anger.

The efcc has become a tool of oppression in the hands of the core muslim north who are using it to crush dissent and silence the opposition.

Just as the Nigerian military was an institution that was designed and used to suppress and intimidate all the so-called lesser ethnic groups in Nigeria between july 29th 1966 and May 29th 1999 so it is with the EFCC today.

That is how emboldened the hegemonists in our midst have become and that is the level of barbarity that we have descended to as a nation.

Yet it gets even worse. Just a few weeks ago, the Minister of Internal Affairs told a bewildered nation that the Sultan of Sokoto (the leader if rhe Muslim community in Nigeria) "directed" him to declare a particular day of the week a public holiday. Without any hesitation he complied with despatch and, with pride, he announced it to the public. Welcome to the Islamic Republic of Nigeria where the caliphate rules.

Is it any wonder that every single one of the numerous security and intelligence agencies in our country except for one is headed by a northerner?

Whether it be the army, the navy, the air force, the police, the Department of State Security (DSS), the EFCC, the National Securiry A'dvisor's Office or the Nigerian Security and Civil Defence Corps (NSCDC), they are all headed by individuals that are from the north.

The only exception to the rule is the Nigerian Iintelligence Agency (NIA), the agency which is responsible for external intelligence and international espionage and which is headed by a southerner.

Can such a state of affairs be justified under any circumstances? Are southerners and Chrustians not Nigerians as well? Are they not qualified to head more security agencies?
Does the concept of Federal Character have any meaning in President Buhari's Nigeria? For how much longer will our people tolerate such reckless impunity, racism and injustice from those who believe that they are the Boers and supremacists of what is fast turning into apartheid-Nigeria?
My father's generation fought the battle for independence from our erstwhile British colonial masters.

It was indeed my father, Chief Remilekun Fani-Kayode, that succesfully moved the motion for Nigeria's indepence in Parliament in 1958.

The battle that must be fought today by my genertion is the battle for independence from the sons of Futa Jalon: our internal colonial masters who are relentless in their quest to subjugate and enslave others and who believe that they were born to rule.

This quest for expansion and domination and this insatiable desire to islamise our nation is best reflected by the words and actions of the three Mahdis of the north.

The first was Usman Dan Fodio, the second was his great grandson Sir Ahmadu Bello and the third is Muhammadu Buhari. The hegemonists must be stopped. It is our duty to either restructure or break Nigeria and to ensure that Buhari is the last of the northern Mahdis through a peaceful and democratic process.

We must break our chains of oppression because no one else will break them for us. We must reject slavery. We must rise up and resist our oppressors.

We must break the yoke of servitude and set ourselves free. For this great cause no price is too high to pay. If it means laying down our lives or suffering the bitter pain of persecution then so be it.
No price is too high to pay and no mounatain is too high to climb for attainment of freedom and the restoration of our self respect and collective dignity. No matter what it takes we shall carve out and build our own nation and we shall be free.

The heavy yoke of the last of the Amalekite kings must be broken. The rulership of the third and last Mahdi must be brought to an end in a free and fair election. That is the challenge that we face today.

That is the great work that the Lord would have us complete. That is our duty and our calling: to bring the unbelieving pagans to heel and to pull down the evil structures of caliphate power.
Those that joined forces with the internal colonial masters and helped to enslave their own people shall pay a heavy price for their treachery, collaboration and betrayal.

Our new nation has no room for such people. They will be herded into labour camps and ultimately deported. They are a shameful eyesore: animals with no sense of dignity and pride. They are not fit to live amongst us.

Yet blessed are the courageous and faithful who speak nothing but truth, who despise the oppressor and who champion the cause of the oppressed. They shall flourish like the palm tree in season and their seed shall excel.

Blessed are those that are persecuted for their faith and that are regarded as the "hewers of the wood and the drawers of the water": so-called ethnic inferiors in their own nation.
They shall inherit the land and, in the fullness of time, they shall be liberated from their tormentors and they shall rule over their adversaries.

That is the promise of the Alpha and the Omega and the Ancient of Days. That is a sure word from He that is known as the Lord God of Hosts and the Man of War. That is the counsel of the God of All Flesh: the Adonai, the Elohim and Jehova El Shaddai. None can resist Him.
You must log in or register to reply here.