For Sale - One Bedroom Executive Flat - Lagos (NGN37m)
✅ NEW - car park, swimming pool, 24 hours light/security and more.
Ad
There are indications that former governor of Ekiti state, Kayode Fayemi may have intentionally pitched the state house of assembly against his successor, Ayo Fayose.

According to NIGERIAN TRIBUNE, Dele Olugbemi, a PDP while addressing newsmen in Ado Ekiti, on Thursday, alleged that the All Progressives Party (APC) members of the assembly had plans to confront the governor with their demand for "constituency allowance that was approved by former Governor Kayode Fayemi after he lost the governorship election in June".

Shedding more light on the matter, Olugbemi said, "Fayemi did not pay the allowance for the four years he was governor, claiming lack of funds but only approved N10million per legislature for the 26 members of the assembly after he had lost the election".

"The plan is for the Assembly members to confront Fayose with the approval, knowing full well that there wouldn’t be the money to pay since the treasury had been cleaned up, and when Fayose refuses to pay, they would start trouble with him and his government". 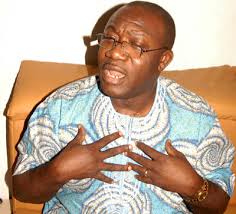