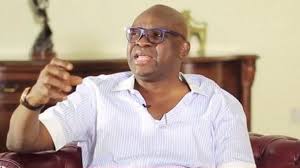 Fayose, who spoke at a gathering in Ado-Ekiti on Wednesday, said the practice of “use and dump” adopted by the leadership of the APC would not allow him contemplate moving into the party.

The governor, in a press statement issued by his Chief Press Secretary, Idowu Adelusi, cited the case of the National Leader of the APC, Senator Bola Tinubu, who worked tirelessly for the victo‎ry of the party in the 2015 general elections in the country, but was abandoned by those he helped to put in power.

He said, “Some people have been making overtures to me to join the APC, but I cannot join them. With what have they repaid somebody like Asiwaju Tinubu? He worked and helped the party to secure victory but has been dumped. That is not a party I would be interested in joining.

“One thing I would not allow is for anybody to rubbish our leaders in the South-West. Our leaders, including Asiwaju Tinubu must be accorded their due respect, as any attempt to rubbish them will be taken as a slap on the entire Yoruba race.”

The clarification by the governor came on the heel of crisis rocking the PDP at the national level in which Senators Ahmed Maka‎rfi and Ali Modu Sheriff are locked in battle over the national chairmanship seat of the party.