For Sale - One Bedroom Executive Flat - Lagos (NGN37m)
✅ NEW - car park, swimming pool, 24 hours light/security and more.
Ad
In Nasarawa state, the Baptist High School, Marke, where some students were burnt to death and others left with injuries will shock every eye.

The inferno that razed the over 50- bed capacity boys hostel left two students dead and three others injured.
The dead students are Joseph Idris and Luka Birmande while Joseph Afara and Josiah John and Adamu sustained burns and were later treated at the Federal Medical Center (FMC), Keffi. 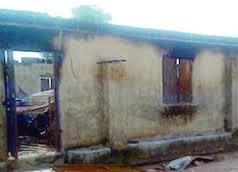 The hostel is said to have been set on fire by unknown arsonists, although, the cause is yet is to be ascertained by the police pending conclusion of investigations.

Hospital sources disclosed that the three students were brought to the hospital at about 2.30am on the fateful morning in very critical conditions and were first treated at the hospital emergency facility.
The day and month of the accident coincides with the 10th anniversary of the school established in September 2005.

The school management, students and the entire community was thrown into sorrow because of the incident, and according to one of the community leaders, Mr. David Aguzi, they have never experienced such before, and never had premonition of such horrible occurrence.

The father of Joseph, His Royal Highness, Idris Danjuma, the Madaki of Ado, in Karu Local Government Area of Nasarawa State, told Abuja Metro that his family is shocked by the death of his 17-year-old son, Joseph who was in Senior Secondary School (SSS) 1 class. He said the teenager was the joy of the entire family.
“My son ‎was burnt beyond recognition in the dormitory of the school where I took him to study. I saw his dead body on his bed where he was sleeping in the night and was caught in the inferno.
“We have since buried him. It is hard to believe and to overcome the fact that he is no more with the family, but we have to move on. We don’t hold anything in mind against any one, not even the school authority because I know that it was not their deliberate intention or wish that my son should be killed in the school,” he stated.

E
Metro Lagos principal: How I defiled twin students, impregnated one - The Cable

Metro Prophet, wife on the run after flogging child to death over ‘witchcraft’ – Olisa.tv