For Sale - One Bedroom Executive Flat - Lagos (NGN37m)
✅ NEW - car park, swimming pool, 24 hours light/security and more.
Ad
A 62-year-old pastor in Ibadan, Pastor Isaiah Ojo, allegedly took a seven-year-old daughter of his friend and fellow pastor, Bidemi (not real name), laid her on the altar of his church and had carnal knowledge of her.

According to Nigerian Tribune, the incident occurred on Monday, May 9, 2016, the little girl had yet to stop bleeding as at Friday, May 13..

Information gathered by Nigerian Tribune revealed that Ojo who is the founder and pastor Dayspring Family Chapel, Egbeda area, Ibadan, committed the act when the seven-year-old girl went to the church premises with her younger brother to play.

The girl’s vagina was reportedly badly torn by forced penetration that she had been bleeding since the occurrence.

Suspects' side of story:

The pastor, who obviously knew that his deed was shameful, stammered and stumbled over words in his attempt to explain what he did to the minor to Nigerian Tribune. Several times, he swallowed hard and muttered ‘Oh! God’ as he talked.
According to him,“the little girl and her younger brother used to come to me to play. Her father is a close friend of mine. 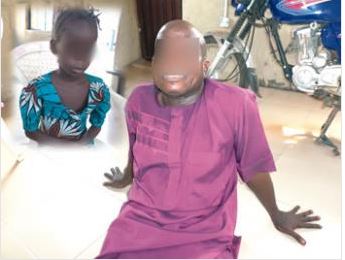 “On Monday May 9, I was in my church premises when she came with her brother. The girl went to lay on the rug on the altar and told her brother that her private part was itching, asking him to come and lay on her. They used to play on the rug before then.

I went near them to ask what was wrong with her. I had to use my hand to help her scratch her private part. After that, the girl said: “Daddy Dayspring, come and lay on me also. When I moved nearer, I could not do anything with her; I did not insert my penis in her vagina.

“What happened next was that I brought my penis out but I could not penetrate her because her vagina was tight. My intention was to touch her, not to damage her. When I saw that her vagina was very tight, I withdrew my penis and left. There was no blood at that time. I don’t know how blood came out of her.”
When asked when last he had sex with his wife, he said six months ago, adding that it was for health reasons. He denied having sex with the girl for ritual purpose, saying she was young enough to be his granddaughter.

Oyo State, DSP Adekunle Ajisebutu, confirmed the story, saying that the suspect had been transferred to the State Criminal Investigation Department for further investigation.

This is completely callous, he deserve capital punishment.

Metro How pastor raped me at 7 –Teenager – Newtelegraph