The Indigenous People of Biafra (IPOB) has commended the leadership of the Nigerian Senate as well as the caucus of South-eastern senators for their position on the proscription of the group.

Recall that Senate President, Bukola Saraki and its deputy, Ike Ekweremadu had described the declaring of IPOB as unconstitutional.

A statement issued yesterday by the group’s Media and Publicity Secretary, Emma Powerful, argued that “mass execution of members of IPOB would have commenced under the cover of Operation Python Dance II, if not for the quick intervention of the Senate President and his colleagues from the South-East”.

The group pledged to co-operate with any commission of inquiry or panel set up by the Senate to ascertain what truly transpired before, during and after the Operation Python Dance II.

The statement read in part, “That South-East lawmakers refused to be cowed into submission to tag IPOB under the leadership of Mazi Nnamdi Kanu, a terrorist and unlawful organisation should be applauded by all lovers of freedom around the world. It represents the triumph of freedom of speech and association over tyranny, brute force and dictatorial tendencies. 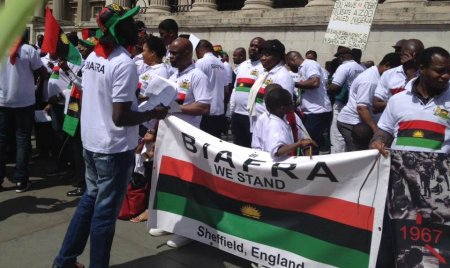 “Having demonstrated this rare courage in the face of overwhelming tyranny and oppression, we, the IPOB members would gladly welcome any fact finding mission the lawmakers may consider necessary under the circumstance.

“Without prejudicing the outcome of this or any other Senate inquiry, we see this as a welcome opportunity to demonstrate to all and sundry that IPOB was never, can never and will never bear arms against anybody or state. This is a golden opportunity for Nigerian lawmakers to ascertain the truth, the whole truth and nothing but the truth.

“We strongly urge the National Assembly to investigate the activities of IPOB thoroughly because we have nothing to fear. They should also look into the recent killings of unarmed civilian populations in Afaraukwu Umuahia and Aba in the on-going military occupation of Biafraland.