FREE Nigerian Business Directory
✅ NEW - get your business listed and your information shared across social media.
Ad
TV Personality, Piers Morgan has written a piece on the Kim Kardashian attack that took place in Paris. 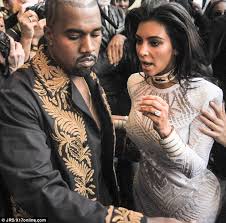 Kim Kardashian could be dead today. The gang of armed robbers who burst into her Paris apartment at 3am weren’t mucking around. They were very serious criminals who had clearly planned their attack for some time. The thugs tied her up at gunpoint and stole an estimated $11 million worth of jewels. It was a vicious, nasty and dangerous incident. But Kim was lucky."

This is Paris, scene of two of the worst ISIS terror attacks in recent years.

She is self-evidently a prime target for Islamic extremists, as a world famous woman who represents everything they abhor about western civilisation.

Imagine if those five men had been sent by Islamic State?
Doesn’t bear thinking about does it, regardless of your views about Kim Kardashian?
(I myself have criticised her repeatedly for posting nude selfies in the supposed name of feminism, but this attack was a terrifying experience for any woman to endure and she has my deepest sympathy.)

Only it DOES bear thinking about.
In fact, there is one man whose sole job it is to think about such an eventuality.
His name is Pascal Duvier, Kim’s massive granite-faced personal bodyguard and head of her and her husband Kanye West’s security team.
We’ve all become way too familiar with Mr Duvier in recent months.

Kim often mentions him in tweets or Instagram posts, and he himself is a social media junkie, a bizarre practice for a man in a profession where secrecy and keeping a low profile is paramount.
A glance through Duvier’s own Instagram account reveals endless self-glorifying images of him with his famous clients, and pompous self-inflating homilies about the art of being a bodyguard.


This is a man who clearly believes he is almost as big a star as the people he is paid to protect and likes nothing more than bragging about it.
Yet when it comes to actually doing his job, he failed dismally.

This was not the first security threat against Kim while they have been in Paris, where she has been attending Fashion Week.

Four days ago, a notorious Ukrainian prankster tried to grab her as she walked out of a car in the centre of the city.

Duvier, who is 6ft 4in and 264 pounds, moved quickly to stop him, though not quick enough to prevent the assailant reaching his target.

If the idiot prankster had been armed, it would have been a far worse outcome.
Yet Kim seemed thrilled. ‘My security Pascal Duvier is a G!’ she told her 48 million Twitter followers.

‘You don’t become a bodyguard overnight,’ Duvier declared on Twitter yesterday just hours before the attack: ‘It’s a job with dedication, responsibility and passion. Do your job for your own satisfaction, not for applause, attention or fortune.’

The sheer irony of him saying all this on social media, the very epicentre of attention-seeking, is extraordinary.

Particularly as he then decided to go a nightclub with Kim’s mother Kris and sister Kendall rather than stay with his principle charge.
If Duvier needs any help in working out the potential repercussions of what happened last night, I suggest he talks to a man named Clint Hill.

He was the US secret service agent who sprinted desperately to jump onto the back of President Kennedy’s limo after he was shot by Lee Harvey Oswald in Dallas.
I interviewed Hill, a modest and unassuming man now in his 80s, and asked how often he thinks about what happened.

His eyes filled with tears. ‘Every single day of my life. I just wish I could have got there sooner to stop the final bullet.’

The regret and guilt were as painfully etched on Hill’s face as they must have been back in 1963.
Kim Kardashian is not President of the United States.

Nor, and I think I can say this with some certainty despite the emergence of reality TV stars as presidential candidates, is she ever likely to be. But she is ridiculously famous for someone who by her own admission has no talent, and has tens of millions of fans around the world.

When you reach the level of her kind of celebrity, personal security is not something to be taken lightly. There are very real threats all the time from all manner of stalkers, pranksters, idiots and criminals.

She is also, as I said earlier, a perfect target for kidnappers or terrorists. For her personal bodyguard, who is presumably on a large six-figure salary, to have allowed this to happen on his watch is unforgivably negligent.

Only hours before this robbery, Kim tweeted a photo of her with Duvier behind her, with the caption: This guy is always in my shot!’

It turns out that he is, except when it really matters.

To leave your globally famous female boss alone in an apartment laden with millions of dollars worth of jewels when she’s already just been attacked in the city, is a stunning dereliction of duty.
Duvier is the CEO and chairman of a company called ProtectSecurity and has been a security consultant to a number of other stars including singer Ciara and the Black Eyed Peas.

‘The most essential muscle a bodyguard should trust is his brain,’ Duvier said in a recent interview (why is he even DOING interviews?). ‘You study everything, your surroundings. I always pay attention to detail.’

Seems to me Duvier is singularly lacking in the brain cell department and misses the world’s most obvious details. I never did find out what Kim’s effusive ‘G’ tribute stands for I would hazard a guess at ‘Ginormous Goon’.

My advice to Ms Kardashian is to fire Duvier today and hire someone who prioritises protecting her life before constantly striving to enhance his own brand. My second piece of advice to Kim is do this before Kanye gets hold of him.
Last edited by a moderator: Oct 4, 2016
You must log in or register to reply here.