Politics Magu Invited To Speak On Anti-Corruption In London

For Sale - One Bedroom Executive Flat - Lagos (NGN37m)
✅ NEW - car park, swimming pool, 24 hours light/security and more.
Ad
Ibrahim Magu, acting chairman of the Economic and Financial Crimes Commission (EFCC) has been invited to speak at on anti-corruption in London. 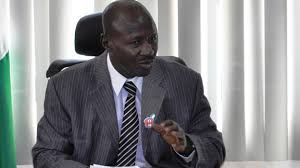 "It also coincidentally comes a few days after members of the Nigerian Senate chose to overlook the strides achieved by Magu, and instead refused his re-nomination by President Muhammadu Buhari as the substantive chairman of the EFCC."

"The international conference, which is coming on the heels of the 2016 London Anti-Corruption Summit, will focus on the progress of Nigeria’s asset recovery and anti-corruption efforts. It will also feature a panel discussions for “critical exchange of views” between officials and non-government experts from Nigeria and the United Kingdom.