An explosion suspected to be from an improvised Explosive Device, IED, has just occurred at a Motor Park in Yola, Adamawa State, Premium Times reports.

A witness, Mohammed Danasabe, said that the explosion was so loud it could be heard all over the city.

He said many people were killed, but could not give a figure. 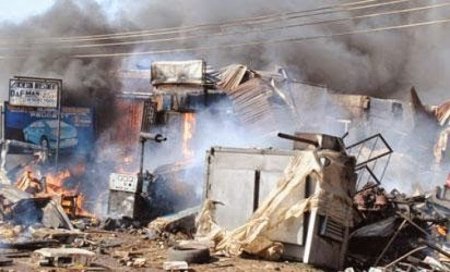 “I am currently at the scene and we are helping to evacuate injured to the Hospital, there are many dead bodies all over the place,” he said.

The scene of the blast is close to the main vegetable market in the town and the explosion occurred as traders were closing for the day and rushing home, Mr. Dansabe said.

Yola has been hit by two deadly bomb attacks this year, with more than 50 people killed.