The Minister of Finance, Mrs Kemi Adeosun has said that President Muhammadu Buhari-led federal government plans to borrow a total of 1.8 trillion Naira at home and abroad to fund an expected budget deficit of 2.2 trillion Naira.

Mrs. Adeosun said in Abuja on Friday that the government is set to inject an additional 350 billion Naira ($1.1 billion) into the economy and raise $1 billion from Euro-bonds by mid-December to ease the recession.

She said: “in an attempt to reviving the crashed economy, the government has approved borrowing from the African Development Bank, China, Japan and World Bank with rates of 1.25 per cent and a 20-year maturity. 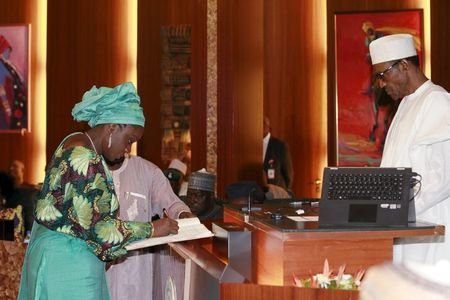 “We have approvals in that plan from the World Bank, ADB, with interest rates as low as 1.5 per cent and tenures as low as forty years to intervene in some specific areas which include agriculture, education, health, rebuilding of the northeast and of course the railway project that are very key to what we are doing,” Mrs Adeosun explained.
Last edited: Sep 17, 2016
Share:
Facebook Twitter Reddit WhatsApp Email Link
[3460]