Metro Nnamdi Kanu Sent Back To Kuje Prison Despite Bail

Curators
FREE Nigerian Business Directory
✅ NEW - get your business listed and your information shared across social media.
Ad
Operatives of the Department of State Services, DSS, and men of the Nigerian Prisons Service, DSS, returned the leader of the Indigenous People of Biafra, IPOB, back to Kuje Prison after he was granted bail by an Abuja Federal High Court. 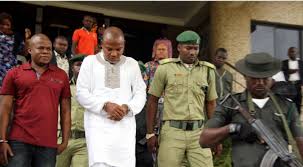 The decision shows that until Kanu meets his bail condition, he cannot be set free.

Kanu alongside three other pro-Biafra agitators were whisked away in a green prisons vehicle escorted by four other black hilux vans carrying men of the secret police.

He is a king that's why he is surrounded by heavily armed security men.

Ofcourse, federal government of Nigeria had to give him such adequate protection otherwise if anything happen to him.
N

chyfirst said:
Ofcourse, federal government of Nigeria had to give him such adequate protection otherwise if anything happen to him.
Click to expand...

Heheheheheh. What will happen will be unpredictable
A

E sure for this guy o
A

Your chi will help sir.
U

It just a matter of time
U

When the time is ripe, you, me and Biafra would be free
T

This one is strong