Following demolition of the popular Owonifari Electronic Market at Oshodi, the Lagos State government has said that the market had to go following its security threats to residents of the state.

State Commissioner for Information and Strategy, Steve Ayorinde, at an inter ministerial chat with reporters on Thursday, said that the demolition exercise on Tuesday and Wednesday actually confirmed some of their fears, “as we discovered concrete bunker and arms underneath the shops.”

According to Guardian, The government said though the matter of relocation had been on for about 10 years, recent intelligence report and criminal activities around Oshodi during the festive season, informed the drastic action of the state government. 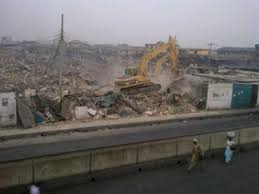 The government said plans were already in top gear to begin the construction of a world-class bus terminus in the loop.

It would be recalled that bulldozers swung into action late Tuesday night, destroying over 1000 shops in the Owonifari loop following a quit notice served to the occupants on December 21, 2015.
PLACE YOUR ADVERT HERE
Connect with people interested in education, social, crime and health News!