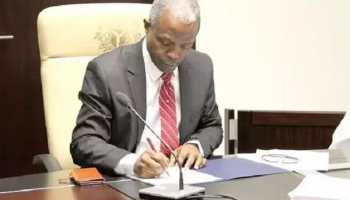 President of the Senate, Dr Bukola Saraki, read the letter at plenary on Tuesday.

He quoted Osinbajo as saying: “I have the honour to seek Senate’s approval to extend the application of the Federal Capital Territory Administration 2016 Statutory Appropriation Act until April 30, 2017.

“It would be recalled that the 2016 FCT Appropriation was assented to on August 29, 2016, a fact that affected its implementation in respect of capital projects and other expenditure.

“In this connection, numerous payments for critical and essential projects are now outstanding.”

He acknowledged that though the Bill was assented to on Aug. 29, 2016, with its termination date as Dec. 31, 2016, but said that it needed beyond December, 2016 for full implementation.

“To meet its obligation and as permissible by the Constitution, the FCT 2016 Appropriation needs to be extended to April 30 to enable the FCT make payments for various critical and essential ongoing projects.

“This will ensure better performance in the implementation of projects for the 2016 statutory appropriation,’’ the vice president said.

P
Business Collateral and Credit Acts: 5 Things You Should Know About Bills Signed By Osinbajo