For Sale - One Bedroom Executive Flat - Lagos (NGN37m)
✅ NEW - car park, swimming pool, 24 hours light/security and more.
Ad
The First Lady, Dame Patience Jonathan, on Tuesday said that she did not campaign for former Governor Rasheed Ladoja of Oyo neither does she have political favourites.

She warned mischief makers and political jobbers to desist from dropping her name for their political survival and fortunes.

This is contained in a statement signed by her Media Assistant, Mr Ayo Adewuyi, in Abuja in reaction to some media report against the first lady.

According to the alleged report, Dame Jonathan had requested the PDP leaders in Oyo state to "accommodate" a former governor of the state, Chief Rashidi Ladoja, who is an Accord Party chieftain in the PDP and be "supported to realise his governorship ambition”.

"This is another attempt by mischief makers to loop their self-induced political travails around the First Lady, to develop another strategy for their survival. It has again come to our notice that a new twist has been introduced to the carefully orchestrated scheme to anchor the political fortunes or survival of certain politicians on a deliberate demonisation of Dame Jonathan has continued to preach the gospel of peaceful atmosphere for the conduct of 2015 elections.

"We consider it preposterous that it can be assumed by any person that the First Lady would possibly make such request on behalf of someone who is not even in the ruling party, the PDP.

"We ask again, on what platform? Within what context? And to achieve what? Is Ladoja in PDP?

"Let us state once again, that the First Lady is not an elected official of state, neither is she a party functionary. She therefore recognises very clearly her place in the scheme of things and acts always accordingly.

"If anything, she has continued to preach for peaceful conduct of all aspirants before, during and after elections, since she believes that Peace is prerequisite to a free and fair election and ultimately, development and unity of the country.

"The First Lady is of the opinion that we need peaceful environment for the election itself and when there is likelihood of crisis brewing; performing her role as the President of the African First Ladies Peace Mission becomes inevitable, since charity must begin at home.

"She believes the elections can only be conducted in a peaceful atmosphere and the aspirants must be alive to contest and win election. She only preaches peace because she is a mother of peace,’’ the statement read in part.

However , it explained that Dame Jonathan was in Ibadan recently only for the purpose of commissioning the Oyo state office of Women for Change and Development Initiative, one of her NGOs seeking to uplift the status of Nigerian women, during which women of the state were equally empowered.

"To therefore say that the First Lady summoned PDP Governorship aspirants in Oyo State asking them to accommodate an Accord Party aspirant is to say the least dubious, diversionary, unfair, unkind, and therefore totally unacceptable," it stated. 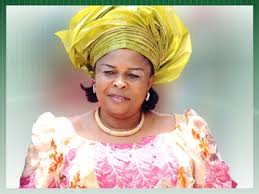 I think the job of a CPS must be fun and very lucrative. Someone speaks and you reply officially and get paid. Interesting! Patience loves politics and I would give an eye to listen to what she tells her husband about Nigerian politics.

E
Metro I’ll choose you to be my husband over and over - Former first lady, Patience Jonathan tells her hubby, Goodluck Jonathan - Linda Ikejis Blog

Dec 20, 2020
Kayode Israel
K
E
Politics ‘I don’t have pillow talk with my husband’ — Aisha Buhari reveals why she keeps ‘talking’ - The Cable