FREE Nigerian Business Directory
✅ NEW - get your business listed and your information shared across social media.
Ad
The hearing of the former Plateau State Governor, Joshua Dariye resumed yesterday after about nine years for alleged money laundering before the High Court of the Federal Capital Territory (FCT), Abuja.

The prosecution called its first witness, who told the court how Dariye allegedly diverted the state’s N1.126billion ecological funds. Dariye is being tried before Justice Adebukola Banjoko.

The witness, Musa Sunday (a detective with the Economic and Financial Crimes Commission –EFCC), who was led in evidence by the lead prosecution lawyer, Rotimi Jacobs (SAN), said he was involved in the investigation into how Dariye as governor allegedly diverted Plateau State’s funds.

He told the court how Dariye allegedly applied for the ecological fund in the name of his state in 2001, but collected the money in person and diverted it.

According to The Nation, Sunday said upon receiving the cheque for the N1.126b ecological fund, Dariye allegedly lodged it with his private banker, the Abuja branch manager of All States Trust Bank Plc (now defunct), with instruction on how it should be disbursed. 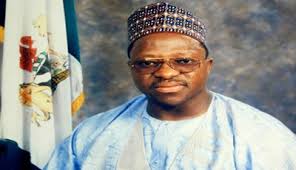 Sunday said Dariye instructed the payment of N178.8m to an unregistered company – Ebenezer Retnan Venture Limited, which was later discovered to belong to the ex-governor.

He said Dariye ordered the payment of N80m from the ecological fund to Kingsley Nkumeh, a Permanent Secretary in the Ecological Fund Office.

The witness said although the EFCC later recovered the N80m from Nkumeh, he ran out of the country on learning that he was to be prosecuted, and has since not returned.

anti craft agencies because in my opinion, A corrupt judge is worse than a corruption politician

or a political thief.

real enemies, will be the key to not only fighting corruption but making the institutions stronger.

9 years for Dariye's trial to start is seriously laughable.