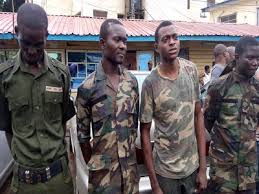 Anthony told reporters that he was dismissed from service as a corporal for falling out from duty.

“I was dismissed in January 2014 for falling out from duty. I am from Adamawa state. I wanted to use the uniform to travel to Lagos because I had no transport money. But unfortunately, I was arrested by soldiers,” he said.

Acha, a welder from Benue State, said he found the camouflage T-shirt inside the bag his brother gave him at Ikeja cantonment.

“I wore it. I was arrested for wearing the army T-shirt,” he said.

Izunwanne said he bought the uniform at Ojo Cantonment on September 2.