FREE Nigerian Business Directory
✅ NEW - get your business listed and your information shared across social media.
Ad
The first woman to take a Bishop’s seat in the House of Lords has said that God should not be referred to as either ‘He’ or ‘She’, insisting that God is gender-neutral.

The Bishop of Gloucester, who today took her place in the upper chamber for the first time, said that she always referred to God as simply “God”. 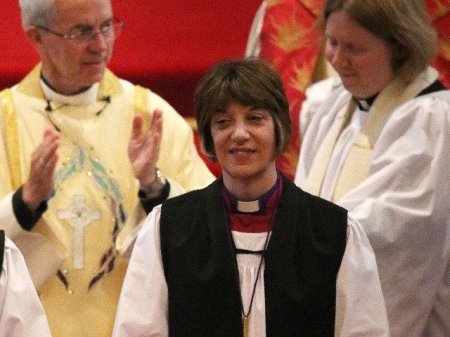 As Bishop of Gloucester, the Rt Rev Rachel Trewood is the Church of England’s most senior clergywoman. Today, she was introduced to the House of Lords as one of 26 Lords Spiritual, becoming the first female Bishop to take a seat in the Lords.

Speaking over the weekend, the Bishop used her platform to raise the subject of God’s gender, saying: “In the creation narratives, we’re told that God created human beings in God’s likeness, and then it goes on to talk about male and female. If I am made in the image of God, then God is not to be seen as male. God is God.”

Bishop Trewood has renounced the use of the pronouns “He” or “She” to refer to God, preferring simply to use the word “God”, although she admitted to the Observer: “Sometimes I lapse, but I try not to.

“I am not in the business of wanting to offend anyone, but I do want to gently challenge people,” she said, adding that language is “very powerful in shaping people’s views and shaping our culture”.

She has been supported in her comments by Reverend Dr Miranda Threlfall-Holmes, vice-chair of pressure group WATCH (Women And The Church) – which promotes inclusive language in the Church of England. “I’m pleased that Rachel is using her position to make these points,” she said.

“Recently the Church has been concentrating so much on whether we should have women bishops we took our eye off the ball about God. God doesn’t have a gender – God is beyond gender.”

As part of the traditional ceremony of introduction, Bishop Treweek will take her place on the red benches after her “writ of summons” is read aloud. She reveals that she sent back the first draft because it referred to her as a “right reverend father in God”. She also rejected “right reverend mother in God,” as it didn’t “sit comfortably” with her, and will be referred to simply as Bishop.

“There’s something about the whole connotation of ‘mother’ that has a sense of dependency for me. It’s not how I want to be looked at. I see myself as a leader, as leading from among people” she said.

Creation narratives aside, the Bishop appears to be going directly against the teachings of Jesus Christ Himself, who instructed his disciples to pray to Abba, ‘Father’, and not merely to ‘God’, or indeed to imma, ‘mother’. Therefore the very first line of the Lord’s Prayer, given to the disciples and all his followers as a model upon which prayer is to be built, is “Our Father in Heaven…”

In his book on the Lord’s Prayer, author Ronald J. Lavin further points out that use of the word Abba in prayer was very important for Jesus:

“Jesus used the Aramaic term Abba [Father] when he was asked by his disciples how to pray. “When you pray, say Abba,” he said. This was the familiar term of affectionate intimacy used by Jesus every time he prayed, with one exception. The one exception is the cry of dereliction from the cross, “My God, my God, why have you forsaken me?” In every prayer but this one, Jesus calls God, ‘Abba’.”

Despite showing some ambivalence over applying the term ‘feminist’ to herself (“if it means women wanting to be men – and sometimes that’s a slight feeling of being loud and domineering – then I would reject that”), Bishop Treweek said that the church still has a long way to go on gender equality. “We’re not at a place where men and women are represented in equal numbers across church roles,” she said. “We don’t have large numbers of young women coming forward to be ordained. We have to ask ourselves why that is.”

She also criticised the church’s lack of diversity, saying “we’re not where we should be with diversity, particularly with ethnic minorities”. The church, she said, is “the Church of England, and England is made up of people of all colours, genders, different experiences, different social backgrounds.”

Bishop Treweek isn’t the only truculent female Bishop to have hit the headlines recently. As Breitbart London reported earlier this month, the world’s first lesbian bishop, the Bishop of Stockholm, has advised a church in her diocese to remove all crosses from its premises and point the way to Mecca for the benefit of Muslim parishioners.

The bible uses he in connectio with God and Jesus came as a he but here is someone with her own confused doctrines trying to confuse people. Stop talking about gender equality in the church and talk about Jesus as it is in the bible. Wolves in sheep clothing.