Metro Sultan of Sokoto Speaks On Miltary-Shi'itee Clash in Zaria

For Sale - One Bedroom Executive Flat - Lagos (NGN37m)
✅ NEW - car park, swimming pool, 24 hours light/security and more.
Ad
Sa’ad Abubakar, the sultan of Sokoto, has warned the federal government not to allow the crisis between the military and the Shi’ite Islamic Movement of Nigeria go out of hand.

According to The Cable, the monarch called on President Muhammadu Buhari to constitute a judicial commission of inquiry to look into the clash, recalling that the insurgency that the country is facing started in a similar manner. He made the observations in a statement, signed on his behalf by Is-haq Oloyede, secretary-general of the Supreme Council for Islamic Affairs (NSCIA). 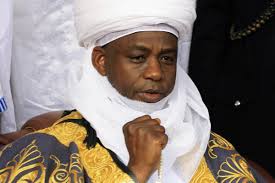 The statement reads: “While there are claims and counter-claims on what actually precipitated the latest heart-rending incident,‎ the NSCIA‎ urges the authorities to exercise restraint.

“The history of the circumstances that engendered the outbreak of militant insurgency in the past, with cataclysmic consequences that Nigeria is yet to recover from, should not be allowed to repeat itself.