"People should cerebrate this day at home or continue with their personal business", said a statement by his office.

He said the money government had set aside for the celebrations should be spent on improving roads in Mwanza in north-western Tanzania. 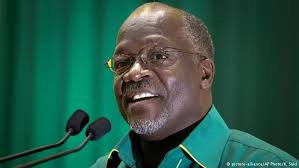 Union Day is marked on 26 April to commemorate the formation of Tanzania in 1964 through the merger of Tanganyika and Zanzibar.

Last year, Mr Magufuli scrapped celebrations to mark 54 years of independence from the UK, and led a clean-up campaign instead.