Sports Wenger Speaks on Impact of Kanu, Other African Players on His Career

Celebrating 20 years in charge of the Gunners this week, Arsene Wenger has paid tribute to the array of African stars that made and continue to make his time in north London an interesting one. 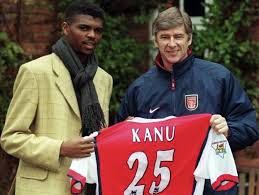 One of the players with the biggest impact early on was Nwankwo Kanu, the Nigerian became the first African to play for Arsenal and he went on to make a name for himself as well as helping to grow the club’s popularity back home.

“African players had a massive impact on my career because I always managed them right from the moment I started in the top league in France,” Wenger was quoted by the club’s website.

“Africans are hugely passionate people and there is a big passion in Africa for the game. They are happy on the football pitch and that’s something which has been fantastic for us.

Kanu went on to win his second African Footballer of the Year prize in 1999 before he was followed on the podium by Emmanuel Adebayor who won the title based on his performance at the club in 2008.