FREE Nigerian Business Directory
✅ NEW - get your business listed and your information shared across social media.
Ad
The Bring Back Our Girls Group (BBOG) on Sunday applauded the Federal Government and security agencies on the release of the 82 Chibok girls.

The commendation came in a statement signed by the Convener of the group, Mrs Oby Ezekwesili on Sunday in Abuja.

“The Nigerian Presidency has confirmed that 82 of our missing 195 Chibok Girls have been released via a negotiated deal.

” The efforts were through the combined effort of security agencies, the military, the government of Switzerland, the Red Cross, local and international NGOs.” 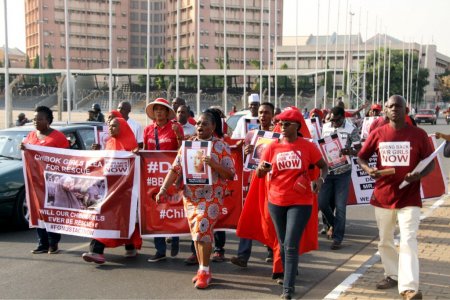 She said the group members were delighted by the good news which followed the release of 21 girls in October 2016.

“We commend Mr President, the Federal Government and all the other partners for this heartwarming development.

“We are also glad that the statement from the Presidency makes a strong commitment to rescuing the remaining 113 of our Chibok Girls that are still captives of terrorists.”

Una have una own agenda
E

U berra believe it

Politics ‘Bring Back Our Girls’ blames government failures for Dapchi kidnap — Nigeria — The...