Metro 480 Nigerian Soldiers In Cameroon are not Defectors- DHQ

The Defence Headquarters has issued a statement claiming that the 480 Nigerian soldiers found in Cameroon are not defectors as alleged by BBC.

A statement titled "BIG STORY: THE NIGERIAN SOLDIERS FOUND IN CAMEROUN" and published on the Defence Headquarters website read: The Nigerian troops that were found in Cameroun was as a result of a sustained battle between the troops and the terrorists around the borders with Cameroun which saw the Nigerian troops charging through the borders in a tactical maneuver. Eventually they found themselves on Camerounian soil. Being allies the normal protocol of managing such incident demanded that the troops submit their weapons in order to assure the friendly country that they were not on a hostile mission.

Following necessary discussions between Nigerian and Camerounian military authorities, the issues have been sorted out. Subsequently, the troops are on their way back to join their unit in Nigeria.

The reference to the incidence as a defection is therefore not appropriate considering the discussion between the two countries’ military leadership and the series of contacts with the soldiers who have confirmed that they are safe.

Meanwhile, troops are repelling a group of terrorists who are trying to enter the country through Gamborou Ngala. A group of them who fizzled into the town are being pursued. 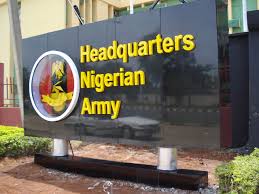 E
Metro ''Don't be afraid of bullet. If you are not meant to die by bullet, it will never kill you''- Defence Minister, Bashir Magashi tells troops in the N..

Metro Why we have not rescued Leah Sharibu, others â Nigerian Army – Linda Ikeji’s Blog