Metro 8 Sins of Dasuki Sambo You May Not Know

President Muhammadu Buhari yesterday ordered the arrest of former National Security Adviser (NSA), Col. Sambo Dasuki (rtd), who has been under house arrest for almost two weeks, over the misappropriation of billions of dollars meant for the procurement of arms to prosecute the war against terrorism. 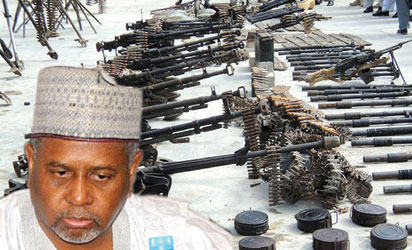 Here are of the alleged offences attributed to the former NSA boss, Sambo Dasuki.

- Awarding "phantom contracts" to buy 12 helicopters, four fighter jets, and bombs and ammunition worth $2 billion that never were supplied.

- Allegdly told Central Bank to transfer $142.6 million to a company with accounts in the United States, the United Kingdom and in West Africa for unknown purposes and without contracts

- Allegedly involved in charges of money-laundering

- Illegal possession of arms seized at two of his homes

- 53 failed contracts, payment for jobs without contractual agreements, non-execution of contracts for the purchase of four Alpha jets, bombs and ammunition

- Dasuki is said to have arrested Mr Buhari, a former military dictator who seized power from a democratically elected government, when he was deposed in a palace coup in 1985.