No fewer than nine persons lost their lives in a road accident that occurred along the Abakaliki-Enugu highway in the early hours of Friday, the News Agency of Nigeria (NAN) reports.

The accident occurred along Ezzangbo portion of the Abakaliki-Enugu highway and involved a Toyota Sienna bus and an articulated vehicle with registration number HKW 436 XA. 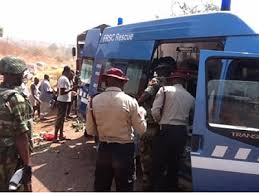 Mr Charles Abuochi, the Sector Commander of the Federal Road Safety Corps (FRSC) in Ebonyi, confirmed the story in an interview with NAN.

He, however, said that the details of the auto crash were still sketchy.

There is an accident that happened along the Ezzangbo portion of the Abakaliki-Enugu Federal highway.

According to him, the accident victims were party supporters travelling to Enugu to observe the Appeal Court ruling on the Ebonyi Governorship Election Petition Tribunal.

He said that the driver of the Sienna bus was moving on a high speed when he lost control of the wheel, skidded off his lane and crashed into the articulated vehicle coming from the opposite direction.
Last edited: Dec 11, 2015