Curators
FREE Nigerian Business Directory
✅ NEW - get your business listed and your information shared across social media.
Ad
The Nigeria Security and Civil Defence Corps in Borno on Thursday said that it had arrested a 40-year-old man for allegedly raping an Internally Displaced Person. 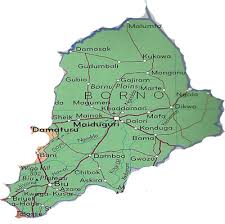 The NSCDC Commandant in the state, Alhaji Abdullahi Ibrahim, told the News Agency of Nigeria in Maiduguri that the 13-year-old victim from Chibok, was staying with her aunt at the Colori Camp.

Ibrahim said the suspect was arrested in Dala area of the state capital.

He said the suspect lured the victim with some money and took her to a house in Colori ward behind the NNPC quarters, where he raped her.

“The suspect held the victim hostage for two days in his house. After intensive search by the command, the girl was later found with the culprit,” Ibrahim said.

The commandant condemned the increasing rate of domestic abuses, ranging from defilement to rape in the state.

“The culprits usually take advantage of the poor living condition of their victims and abuse them.

“We are, therefore, appealing to all good citizens of Borno State to always report any suspicious activities that can cause havoc in the society,” Ibrahim said.