For Sale - One Bedroom Executive Flat - Lagos (NGN37m)
✅ NEW - car park, swimming pool, 24 hours light/security and more.
Ad
President Muhammadu Buhari will host the Golden Eaglets team that won a fifth FIFA U-17 World Cup in Chile and others on January 21 according to the the Minister of Sports, Solomon Dalung.

The Eaglets defeated Mali 2-0 in the final of the U-17 World Cup in November last year.

Successive governments had rewarded the team with huge cash gifts, houses and national honours for these feats in the past. 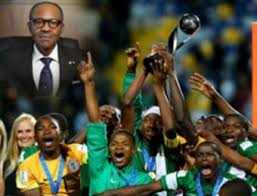 Dalung added that other teams who did Nigeria proud internationally in 2015 will also be rewarded by President Buhari.

The Flying Eagles won the 2015 Africa Youth Championship in March, the Dream Team VI clinched the U-23 African Nations Cup in December, Team Nigeria won medals at the All Africa Games in Congo Brazzaville and Nigeria’s basketball team D’Tigers scooped a first-ever Afrobasket Championship to qualify for the Rio Olympics, among others.