FREE Nigerian Business Directory
✅ NEW - get your business listed and your information shared across social media.
Ad
The Delta State Government has denied and distanced itself from news circulating in the media regarding a report which claimed the state Governor, Dr. Ifeanyi Okowa was defrauded of $10 million belonging to the state by his mistress.

According to the state government, the report which was published in The Nation Newspaper on Saturday, January 28, 2017 has no iota of truth in it as the state governor was neither under the radar of the EFCC nor did he lose the said amount.

In a statement released by the state Commissioner for Information, Mr. Patrick Ukah on behalf of the government, the state government stressed that the public should discard the falsehood 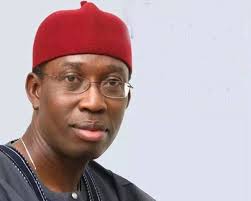 The statement said: “We are appalled by the attempt to link Governor Okowa with the story by online media. We find it ridiculously tasteless and mischievous. This can only be part of the unrelenting campaign of calumny and the ceaseless peddling of pernicious propaganda against the person and the office of the Delta State Governor.

“For the record, the state government has several times in the past given account of how the bailout the state got from the Federal Government was used. We will not repeat ourselves here.

“Governor Okowa is a responsible family man and a well respected public figure".

Curators
It doesn't take a rocket scientist to check this... open the books and if all is well, take legal action.
P

Guilty conscience! No report claimed he did. Maybe he is one sef.
P

curator said:
It doesn't take a rocket scientist to check this... open the books and if all is well, take legal action.
Click to expand...