Seriake Dickson, governor of Bayelsa state, on Monday said President Muhammadu Buhari was stoned in 2011 when he visited the state as the presidential candidate of the Congress for Progressive Change (CPC) during Timipre Sylva's tenure as the governor.

Addressing a press conference in Yenagoa, capital of the state, Dickson said he ensured that Buhari was secure during his visit to Bayelsa as the presidential candidate of the All Progressives Congress (APC). 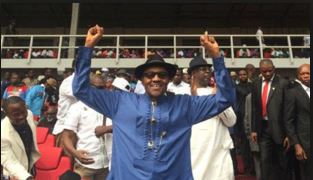 Dickson also accused one of Buhari’s ministers, apparently Heineken Lokpobiri, of “terrorising” people of the state ahead of Saturday rerun election.

“I’m the proponent of political tolerance in this state,” he said.