FREE Nigerian Business Directory
✅ NEW - get your business listed and your information shared across social media.
Ad
Four diplomatic corps officers from the Ethiopian Embassy were on Monday involved in an accident on Independence Avenue in the Central Business District in Abuja, the News Agency of Nigeria (NAN) reports.

The accident which occurred at about 2p.m. left the occupants of the diplomatic hilux vehicle with registration number 43 CD 01 corps diplomatique, badly injured. 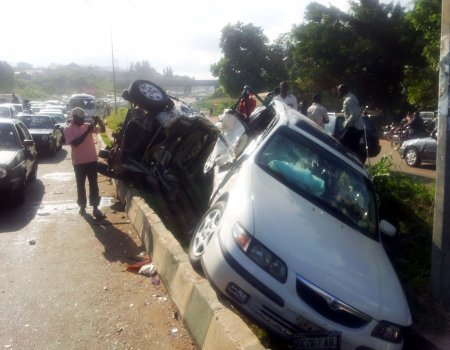 An eye witness, who pleaded anonymity said that the vehicle hit a billboard and somersaulted when the driver could not control the vehicle.

“I saw the vehicle and heard the noise when the driver was trying to apply the brake but he failed to control the vehicle".

“We pulled them out from the vehicle and they were badly injured".

“The police had rushed them to the hospital,’’ the eye witness said.

According to him, the victims have been taken to the National Hospital for treatment.