Mild drama ensued at the Code of Conduct Tribunal as the Chairman, Danladi Umar, on Tuesday threatened to jail senators attending court sessions in solidarity with Senate President Bukola Saraki and throw them out of the tribunal.

The chairman got angry over ‘rude’ comments from senators and other supporters of Mr. Saraki.

The individuals, seated in the court gallery, had repeatedly asked Rotimi Jacobs, prosecution counsel, to “sit down.” 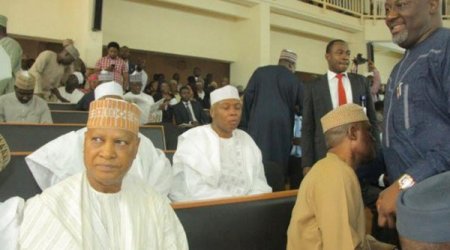 This immediately infuriated Mr. Umar, who said the Senate President’s supporters’ conduct was becoming unbearable in his court, adding that they should “keep quiet.”

“If I hear anybody ask the counsel to sit down, I will deal with the person and nobody can question me about it. In fact, I will hold the person in contempt and sentence the person to hard labour and nobody will question me.”

The trial of Mr. Saraki for alleged anticipatory and false asset declaration resumed Tuesday (today), after weeks of rescheduling at the instance of prosecution team.