Politics El-Rufai: CAN President,Oritsejafor is Irresponsible For Mixing Religion With Politics

A statement issued by Muyiwa Adekeye, Media Advisor to El-Rufai read, "When light unexpectedly shines on murkiness, those exposed by the stinging rays often berate the light rather than regret the muck. That is the plight of Ayo Oritsejafor whose private jet was identified as the vessel impounded by the South African authorities for ferrying $9.3m cash into their country. A statement from Eagle Air admitted Oritsejafor's interests in the aircraft, but said it leased the plane to Green Coast which in turn acknowledged hiring the plane out for the trip to South Africa.

"Unable to shake off his connection to the plane, Oritsejafor has resorted to abuse and vilification. Were he more reflective, he would be pondering how, of all the private jets available in Nigeria, it was his that came to be involved in a covert arms purchase scandal. Would he have managed any objectivity if the plane involved happened to belong to a prominent person of another faith or political persuasion?

"Since abuse is not argument and is incapable of displacing fact, Oritsejafor may care to answer if the jet involved in the scandal is the same one that was "donated" to him in 2012? Did he register it as a commercial aircraft or is the plane illegally moonlighting as one? Has he ever reflected on the impropriety of mixing his religious role with politics? Having strayed into politics, and an irresponsible variant at that, can he expect the veneration enjoyed by his predecessors such as Cardinals Olubunmi Okogie and John Onaiyekan? Why is he the first CAN leader to provoke pitiful mirth and amusement when he is not being derided as a tragedy, a sort of Ichabod, desperate to separate glory from a revered body? Amidst his jitters, Oritsejafor must look beyond the bling to ask himself if it was any of the individuals he abused yesterday that asked him to make his aircraft available for monkey business, or get himself involved in the politics of division.

"It is pertinent that we invite the Federal Government to reflect on its role in this episode. Our country needs to bolster its military and security forces with the material resources they need to defeat insurgency and restore security to every inch of its territory. This would require arms imports. But should Nigeria violate the arms export regulation of other countries in this endeavour? Should the FG recklessly impair and jeopardise diplomatic relations by conducting covert arms purchases in friendly countries without the consent of their governments? Such conduct invariably leads to suspicions that such covert arms procurement may not be for purposes of national security.

"This instance of arms procurement outside official channels amidst an escalating insurgency must concern every patriot. In his House of Commons statement last week, Mallam El Rufai had alluded to the clear implications of the likely link between governmental murkiness and the escalation in the insurgency. The government has long tried to explain away its incompetence in upholding security by blaming insurgency on the major opposition party. But it is becoming increasingly clear to many that this insurgency is benefitting the ruling party and the incumbent president by providing them a pretext to postpone elections and, at the minimum, disenfranchise large swathes of the population that have never supported the PDP or voted for Jonathan.

"Mallam Nasir El Rufai urges every Nigerian to vigilance in these troubled times. The tragedy of mindless terror should not be allowed to become an endless catastrophe because of narrow political calculations". 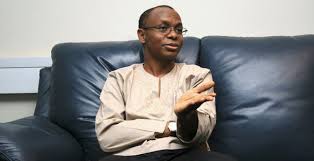