For Sale - One Bedroom Executive Flat - Lagos (NGN37m)
✅ NEW - car park, swimming pool, 24 hours light/security and more.
Ad
It is another weekend of English Premier League action, and with bated breathe many await with much enthusiasm.

No doubt that the standout fixture will be the one at Old Trafford between Manchester United and Chelsea.

It is a game many want to see and everybody's attention would be firmly focused at the proceedings in that match.

For Chelsea, it is a game that will test their true might and title credentials, with many tipping them as favourites.

While Manchester United who have been lukewarm this season, will be playing their first biggest game of the season.

Jose Mourinho will be lining up his troops against his former master Louis Van Gaal, as both men would be looking at having the bragging rights over each other.

While Manchester United and Chelsea wait to thrill the spectators on Sunday, Arsenal and Manchester City face tricky trips to Sunderland and West Ham respectively.

As usual, we have lined up the comments of the top managers and how their teams are preparing for the weekend's games.

However,Wenger stressed on Friday that his defenders needs to improve their showings if they are to win a major trophy.

"It is improving by getting everybody to put a bit more effort in to the defensive work, and that starts not only at the back, but up front and in midfield by increasing the level of defensive activity through the team. We had to reshuffle the defence and [the players] getting used to playing together helps as well.

"Last year we had 17 clean sheets and at the moment we have only had one after eight [Premier League] games, so that is something which we are not on the same level defensively. We train very hard and the spirit is right, the attitude is here. I believe more it is linked with confidence at the moment, but I cannot fault the attitude. It (the win at Anderlecht) will help to improve confidence and I am sure that if we focus on our performance, the rest will come naturally."


Chelsea:
The big news from Chelsea is that their manager Jose Mourinho, confirmed that Deigo Costa has a chance of playing for the Blues.

"He has a chance, he has a little chance. The same as [midfielders] John Mikel Obi and Ramires, but the only one that I can confirm that has no chance for Saturday is striker Loic Remy.

"Everything happened to Costa. He was injured and he had go to the hospital with a viral situation that we didn't manage to resolve without being in the hospital over one night.

And Mourinho has said that they are confident ahead of their match against Manchester United on Sunday: "We are playing well, we are confident. We are top of the league, the camp is happy and we are ready for the game."

"I like to play big matches against the best teams in the most difficult stadiums. I know the risk of not getting a good result is bigger in big matches but I always enjoy them. For me to go to Old Trafford, I've done it with four different clubs and I like to go there and play there."

The striker netted four in the game last week against Tottenham, and has earned everybody's praise including his manager.

"I was always sure Aguero would return to his normal performance [after injury]. I think he can get even better."

Manchester United:
Coach Louis Van Gaal confirmed that Angel Di Maria and Ander Herrera are both fit to play in the game.

“Ander Herrera was already fit and Di Maria said after the game that it wasn't so heavy and it's not. It was only the first day he didn't train, so it's no problem. I'm sorry to say no other players are back, even if I let Carrick play in London for reserves because he needs to play matches when you are five months injured. He told me it was his first game for the reserves.”

However, he refused to be drawn into Mourinho's mind games whether Costa will start or not.

On Costa’s injury concerns: “He will play with him when he can because Jose wants to win. He's scored nine goals in seven games – which is remarkable. So he's in good shape but he was ill so you never know.”

“Chelsea are one of the top teams, as are Manchester City at the moment. Jose [Mourinho] has worked more than a year with his team and last year didn't win anything. You have to build up. They are playing like a team and we have to as well, but to play for 90 minutes. We played as a team against West Bromwich Albion but made individual errors.” 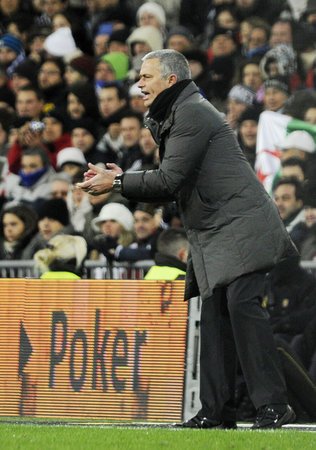 I love this... Put all of the forthcoming games in a thrilling perspective.