Curators
FREE Nigerian Business Directory
✅ NEW - get your business listed and your information shared across social media.
Ad
Fani Kayode and Buhari Critic and former Aviation Minister, Femi Fani-Kayode has sent an open letter to President Muhammadu Buhari on the state of the nation.... 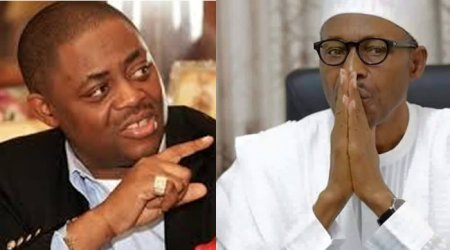 Read the letter below:

I do not share either view. I know you well enough to concede that when you consider a literary submission of sufficient importance you have the presence of mind, discipline, health, intelligence and ability to read through it very slowly and very carefully weighing up every word. And that is precisely as it should be.

The first open letter that I wrote to you was in December 2015 and the following serves as the second.

You will forgive me because this is a long letter and I am fully aware that your attention span or ability to retain too much information in one fell swoop may not be as good as it used to be.

Nevertheless I urge you to do your best to muster the courage, energy and intellectual stamina to stay the course and to find the time out of your busy schedule to read it from beginning to end.

I have written it because our nation is entering into dangerous and precarious waters and I sense that something will give very soon. I am therefore constrained to use this medium to bring my observations to your attention.

Be rest assured that I speak out of nothing but love and concern for the welfare of the Nigerian people and it is not my intention to insult you or undermine and disrespect your office but rather to shine the light of truth on all your activities with a view to assisting and encouraging you to change your ways.

You will agree with me that, no matter how bitter it may be, that truth must be told. This is a sacred obligation on our part as leaders and a matter of duty and honor.

I owe you, the Nigerian people and posterity that much and I have little doubt that no matter how badly you may feel after reading it, history will vindicate me and prove me right and one day you will acknowledge and recognise the profundity, wisdom and foresight in my constant and consistent criticisms, admonitions and counsel.

Outside of that it is my earnest prayer that the God of Heaven, whose I am and whom I serve, will judge between you and I.

Your Excellency, kindly note and consider the following.

You released hundreds of Boko Haram fighters from prison claiming that they are reformed and a few days later 30 of your citizens are blown up by the same Boko Haram in Borno state.

Worse still on that same day 16 members of the same family and four others were herded into a room and burnt alive by Fulani militants in Kaduna state.

After these terrible events instead of rushing back home to stand with your people, you stayed in Addis Ababa, lamenting and crying about the security situation in Libya and you sent your Vice to a funeral in Nairobi. Such insensitivity, even by your own standards, is rarely seen.

It took you three long days to finally see fit to leave your foreign friends, leave Addis Ababa and fly directly to Maiduguri to express your condolences to the Governor and people of Borno.

Even then you could not muster the courage to go to the town of Auno where the bombing took place but only to Maiduguri, the capital of the state.

Understandably you were received with boos, jeers and shouts of “ba ma so” (meaning “we don’t want”) by the crowds that lined the streets and this was an eloquent testimony to the fact that the entire nation, including the north that you claim to represent and be a champion of, is fed up with you and can no longer bear your incompetence and inability to run the affairs of our nation.

Worst still hours after your condolence visit Boko Haram attacked Maiduguri itself hitting one of its suburbs called Jidari Polo.

Their leader, a cowardly creature that can best be described as a psychopathic, delusional, sociopathic, mentally-deranged, murderous, bloodthirsty, blood-lusting and unconciable monster by the name of Abubakar Shekau, even had the nerve to send you a public warning in a recorded message that was released to the public after you left in which he arrogantly and boastfully declared that you must never come back to Borno again or you would be attacked and that you “should fear and serve God and not cows”. He added the following:

“Buhari thinks he is a general but God says he is nothing. He hasn’t achieved anything in the sight of God. Buhari is deceiving the people and playing to the gallery”.

Mr. President, he has sent his message to you and to Nigeria and we have heard him loud and clear.

Yet most disturbing was not his sheer effrontery but the fact that the only thing that you had to offer the leaders and people of Borno state when you got there was a lame and self-debasing question which was “I wonder how Boko Haram still survives?”

You went further by blaming them for “not taking care of local security” forgetting that that is meant to be your job and not theirs.

In your so-called condolence visit you refused to take responsibility for your own inaction and failure and instead you sought to pass the buck to the very victims of terror that you claim to have come to mourn!

You refused to inspire and encourage them and instead you accused them of, at best, irresponsible behaviour and, at worst, collusion with the enemy.

This is not just a case of rubbing salt in their wounds but it is more like blowing them up and killing them all over again. Worse still as you spoke your Minister of Defence, who sat just a few feet away from you, fell fast asleep!

Mr. President I really do wonder whether you have any feeling or any compassion at all? Has the milk of human kindness stopped flowing through your veins?

Do you know that young students, women, infants and babies were amongst those that were blown up in the Auno atrocity?

Yes, you issued a statement immediately but you didn’t show up till three days later and your Vice, who was in the country the day it happened, never showed up at all and instead jetted out to President Arap Moi’s burial in Nairobi!

Kindly tell me what the Nigerian people have done to deserve this level of contempt? Or is there more to it than meets the eye?

Forgive me Mr. President but I am constrained to ask, why do you love terrorism, bloodshed and violence so much? Why do you find it so easy to forgive terrorists that are slaughtering your own people? Are you feeding your spiritual foundation and getting your power from the spilling of innocent blood?

Meanwhile your own Chief of Army Staff has told us today that:

I commend the Chief of Army Staff for his admission of failure but what he didn’t add was that after taking them “into custody” you ordered him to release them and even draft some of them into the Nigerian Army on the spurious grounds that they have repented and that they have been reformed.

Again the truth is that neither you or him ever “defeated insurgency” or anything else. Instead you encouraged and supported it! Both of you have failed the Nigerian people just as I predicted that you would and if you had any decency or honour you would BOTH resign.

Aside that it takes a very mean, callous, wicked and cruel President and Commander-in-Chief to release 1,400 terrorists who have murdered, butchered, slaughtered, tortured and maimed his soldiers and terrorised his people over the last 5 years.

Relevant and instructive are the words of Mr. Charles Ogbu, a brilliant writer and essayist who has consistently proved that he is not only insightful but also deeply profound. Three days after the Auno bombing he wrote the following:

“Those who are asking for the sack of the Service Chiefs as a solution to the upsurge in Boko Haram terrorism are missing the point.

In fact a betting man would bet that the only difference between the Boko Haram terrorists killing, maiming and beheading Nigerians in the Northeast and our President and Commander-In-Chief is in their name and location. One is named “Boko Haram” and operates from the bush while the other one is named “Muhammadu Buhari” and operates from Aso Rock. If we were to remove the cloak of fear of detention by state oppressive forces, we would all admit they are both pursuing the same goal and doing a very good job of it. You that is reading this, you know this is exactly what is happening even if you may not want to publicly say it for whatever reason.

Mr. President, forgive me for saying so but the verdict is out and Mr. Ogbu has made a valid point. This calls for much soul-searching on your part.

I urge you to bear in mind that trading in the blood of your own people and indulging in all manner of barbarity, suppression of dissent, persecution of your perceived enemies and evil comes with a heavy price.

Every Pharaoh, Sennacherib, Herod, Jezebel and Nebuchadnezzar has a bad end.

Every tyrant, no matter how powerful and highly-placed, will eventually account to God and the people for his brutality and wickedness. Yours will be no different.

Anyone that doubts that should consider the plight of the Sudan’s former President, General Al Bashir. As the great black American Nation of Islam leader and one of my favourite heroes, Malcom X, once said “the chickens have finally come home to roost”. This has always been the case and it will always be the case. It is only a matter of time.

Over the last 5 years hundreds of thousands have died under your watch and virtually all have been killed by those from your core northern region. You turned a blind eye to it and even encouraged it.

Today belongs to you but let me assure you that tomorrow belongs to those of us that you have killed, persecuted, oppressed and treated with disdain and contempt.

On the 11th of February, at the burial ceremony of the 18 year old Christian martyr Nnandi Michael (the Seminarian that was abducted and later murdered by Fulani herdsmen) the respected Catholic cleric Bishop Matthew Hassan Kukah, a man of immense moral authority and intellectual vigour, courageously admonished you before the entire world, spoke the bitter truth and reflected the thoughts of millions from all over the country. Amongst many other things he said the following:

“This President has displayed the greatest degree of insensitivity in managing our country’s rich diversity.
He has subordinated the larger interests of the country to the hegemonic interests of his co-religionists and clansmen and women. The impression created now is that, to hold a key and strategic position in Nigeria today, it is more important to be a northern Muslim than a Nigerian.”

He did not stop there but went on to say,

“We are being told that this situation has nothing to do with Religion. Really? It is what happens when politicians use religion to extend the frontiers of their ambition and power. Are we to believe that simply because Boko Haram kills Muslims too, they wear no religious garb? Are we to deny the evidence before us, of kidnappers separating Muslims from infidels or compelling Christians to convert or die? If your son steals from me, do you solve the problem by saying he also steals from you?”