Nigeria's President, Mohammadu Buhari returned to the country on Sunday, June 19, after an extended 10-day Medical trip to London. He was reportedly flown abroad to see an ENT specialist for his ear infection. He arrived the Abuja airport at around 5:30 pm with arousing welcome from members of his cabinet. Buhari told journalists that he is hale and hearty, and ready to wrestle with anyone. On arrival, his media aide, Femi Adeshina spoke to journalists reflecting on Buhari's one year in office, his personal life, party and being Nigeria's president. 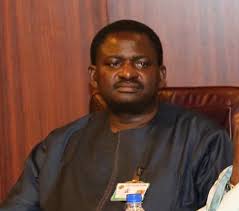 Some of the excerpts below.
---
When asked on Buhari's fight against 'inherited' corruption, Adeshina said:

“I remember in the UK about two weeks ago, one foreign media asked the president – did you know it was this bad? He confessed that he knew it was bad but he didn’t know it was that bad. It has turned out very, very bad. But it is also something that the government is tackling and the president is determined to leave a saner and cleaner Nigeria in terms of accountability and probity by the way he is going. No matter what anybody says about this corruption war, no friend no foe, no retreat, no surrender. Anybody, irrespective of who he is, if he has questions to answer on corruption, he will have to answer. I hear people say that it is selective. They need to prove. He who alleges must also prove. The anti-corruption war is going on and going on very well and it has earned Nigeria a lot of respect in the international community. The third promise he made was to revive the economy.

So, I will say so far so good, the government is on course. I have used this illustration before, and I will use it again. Nigeria is like a plane that has taken off and is gaining altitude, with its nose in the air. As long as its nose is in the air, it is climbing. If the nose is down it is a danger signal.”

Aside the economy, are there some things the president discovered that you will want to tell us?
“The president has promised that the May 29 broadcast will be quite revealing and I can tell you it will be quite revealing. You also know that apart from the economy, even the inter-ethnic relationship in the country was an issue. The president met a country that had been badly divided, more than at any time in the history of this country. Because in the last days of the last administration, all the things that divided us were emphasised because they wanted to win the election at all cost. They used religion, used ethnicity, used language, used where you came from, threw everything into it. He inherited a country that was almost breaking apart. It is gradual process to put the country together. We are not there yet. We know that there are still some agitations in some parts of the country. Those are still fallout of the things he inherited.”

Is the president bothered about the trial of the Senate President, Bukola Saraki, who is the number three citizen of this country?

What about his relationship with his party?
“The president recognises that the platform that brought him is the party. No president has legitimacy without a platform and the APC is his platform. From time to time he meets with the party, meets with the National Working Committee (NWC) of the party and twice in the life of this administration he has gone to attend meetings at the party secretariat. That already shows you the importance he places on the party.”

But there are stories that he does not help the party in terms of funding?

“How do you expect a government to fund a party with government’s money? Part of the problem the last party in government had was that it took official money to campaign. And that is why they all answering in court today. Knowing President Buhari, he will never do that. There are many ways to fund a political party but he will not dip hands into the coffers of government to fund a political party. He won’t do it. Don’t forget that when he came in 1983, a lot of politicians went to jail for using official money to enrich political parties. How do you think a man like that will then come and do the same thing? Not this president.”

Does running Nigeria negatively affect his relationship with his family?
“If you know the president and how organised he is then you will know it won’t affect the family much. No doubt it is a demanding job. It will mean that there is demand on his time more than it used to be but because he is so organised I am sure he still has a lot of time to spend with his family. One thing you need to know about the president is his respect for time. On the dot of the hour when he has anything to do, he is there. If he should finish, he finishes. That therefore makes it easy for him to plan his schedule when he starts in the morning till evening. You need to get to his house in the evenings. When I need to see him even about official things I go to the house in the evening. You need to see the place.

One day I went to see him after the 8 ‘o’ clock prayers, just two of us were waiting to see him. The second person was a top person in government before and he told me ‘look at this vast place and only two of us are waiting to see the president.’ He said in one dispensation that I will not mention, come to this place at 2am or 3am it is still like a market place. When any government runs like that, you know it is not good. You know it is either they are wheeling and dealing or cutting deals and when a president is still up by 2am or 5am when he will still get to work the next day, how effective will he be in the office and all that. Not this president. By the time he has his dinner, he meets just a few people that have been scheduled to see him and he goes to bed.”

How does he spend his weekends? “Because he is president of a country of 170 million people, work is not restricted just to the office. There are things he treats at home. He has an office at home where he continues his work. But you will be surprised that on weekends his grandchildren jump on him, they climb all over him just like a typical grandfather.”