Governor Godswill Akpabio of Akwa Ibom State spent $10 million over a twenty-five trips or 600 hours of service. The governor hired a private jet, a Canadian Challenger 604 from Swiss-based Vista jet, an investigation by SaharaReporters has revealed.

Mr. Akpabio paid the sum to the jet charter company owned in part by Kola Aluko. Mr. Aluko is known to be quite close to Nigeria’s Petroleum Minister, Diezani Alison-Madueke, and has been described as one of a few fronts for the minister’s extensive money laundering schemes.

Mr. Aluko was also instrumental to the private jet provided to the Nigerian Petroleum minister who caused the Nigeria National Petroleum Corporation (NNPC) to spent N10 billion naira to charter another Vista jet, Challenger 850 Aircraft marked OE-ILA which has now been moved out of Nigeria following an investigation launched by the House of Representatives. 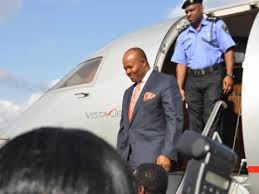