Emami, who was joined by the commander of the Joint Task Force (JTF), Major-General Okunlola during the inspection the oil pipelines vandalized by suspected loyalists of wanted ex-militant, Government Ekpemupolo (AKA Tompolo), at Egwa II, Warri South-West LGA. The APC leader has claimed that the strong stances he has taken has led to death threats against both himself and his family. 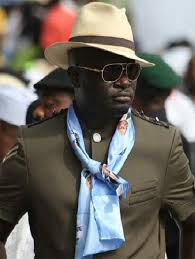 "Since the incident, I have been receiving death threats because of my campaign against the vandalization of pipelines by these unscrupulous elements as well as illegal oil bunkering, which has led to pollution and destruction of ecological lives in various communities in the region:, he told SaharaReporters

Meanwhile, a Non-Governmental Organization (NGO) known as the Warri Peace Monitors has commended the visit of the Federal Delegation led by Minister of Defence, Chief of Defence Staff (CDS) and top military brass to the scenes of the pipeline vandalization in Delta State on Tuesday.