Entertainment Jesse Williams to Be Fired From Grey's Anatomy ?

Some fans of Grey's Anatomy TV series has started a petition to get Jesse Williams fired from from the show. 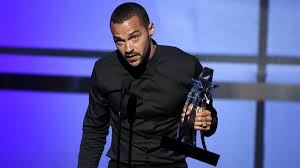 The petition, has garnered about 1,796 signatures

"Jesse Williams spewed a racist, hate speech against law enforcement and white people at the BET awards. If this was a white person making the same speech about an African American, they would have been fired and globally chastised, as they should be, but there has been no consequences to Williams’ actions. There’s been no companies making a stand against his racist remarks and no swift action condemning his negative attitude. Why was Burke’s character fired from Grey’s Anatomy after his inappropriate homophobic slur, but nothing for Jesse Williams? Why the one-way street? Why the support for a hater? Why the hypocrisy? #AllLivesMatter All humans bleed the same color. #EqualConsequences4RacistBehavior”

**A special note to all the people making assumptions: Who said I was white? Who said I'm a Trump supporter? This is not about politics. This is about equal consequences for racist behavior. If this was an Asian, Mexican, Caucasian or whoever saying the same exact words as Jesse Williams did, I would be against it and petitioned them to be fired if they did not suffer the same consequences as others have suffered for their irrational behavior. We're all human. Why not act that way? Instead of lashing out with immature and obnoxious name calling, do something about getting everyone to look at everyone in the same light. Make a difference!
PLACE YOUR ADVERT HERE
Connect with people interested in Entertainment News!