The Nigeria Labour Congress (NLC) and the Trade Union Congress (TUC) have concluded plans to hold a protest rally over the state of the nation. 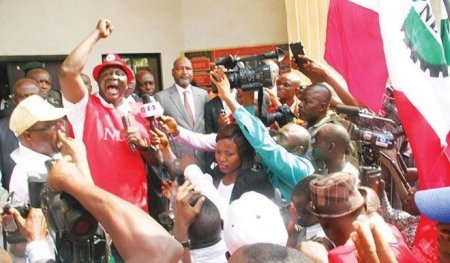 The protest code named ‘national day of action against orruption and for good governance’ will hold simultaneously in Abuja and Lagos.

NLC president, Comrade Ayuba Wabba who addressed journalists on the planned action in Abuja yesterday said the day would be marked with marches, rallies and submission of petition containing a list of demands to the government at the Presidency and the National Assembly.

Wabba said workers and Nigerians will gathered as early as 7am at the Unity Fountain, Abuja from where the protest will head to the Federal Secretariat, the National Assembly and to the Presidency.

He said the protest is necessitated by need for good governance in the face of recession and free for all multiple exchange rate regime, which has very negative effect on manufacturing and other sectors of the economy.

Wabba said other issues include the review of minimum wage and payment of salaries, adding that the organized Labour would also take the protest to state level after the national rally.

He stressed that the NLC and TUC must lead the frontier even as he said every Nigerian has the right to protest without taking any permission from the police.
PLACE YOUR ADVERT HERE
Connect with people interested in education, social, crime and health News!