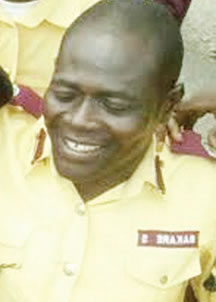 It was learnt that Olatunji, who was the zonal head of the agency in the Apapa area, had led a team of officials to the area in a patrol van to arrest erring motorists at about 11am.

Punch gathered that tanker drivers, who parked their vehicles on the road fled on sighting the enforcement agents.

The LASTMA van was said to have ran into an assistant driver (motor boy) while he struggled to escape arrest.

The boy, whose name had yet to be ascertained, was reportedly sleeping by the roadside.

He died on the spot.

Angered by the boy’s death, his friends were said to have regrouped and went on the rampage, killing Olatunji in the process.

A mechanic in the area, Uthman Salau, said another LASTMA official was injured, while others fled the scene.

He said, “The drivers were relaxing around 10.30am when they saw a LASTMA van approaching. They felt the officials had come to arrest them for parking vehicles indiscriminately. So, they ran away. A motor boy, who was sleeping beside a tanker, was woken up by the commotion. Before he could escape from the spot, the LASTMA van hit him and he died instantly.

“One of the drivers, who saw the boy lying in a pool of blood, called his colleagues and they stormed the scene with cutlasses, bottles and all sorts of weapons. The officials fled with the van except their team leader (Olatunji). They stabbed him to death.”

The Lagos State Police Public Relations Officer, SP Dolapo Badmos, in a text message, said the case was under investigation.