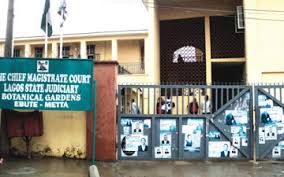 According to PM News, a 26-year-old man identified as John Imonite has been arrested and charged before Ebute Metta Magistrates’ court, for allegedly engaging a 19-year old teenager in an unlawful sex inside his SUV at the premises of Vantage Restaurant in Lekki, Lagos.

Imonitie allegedly lured the victim to a popular restaurant in Lekki and thereafter had sex with her without her consent inside his SUV.

According to the victim, Imonitie lured her inside a Honda Civic SUV with registration number Lagos JJJ 603 AU and allegdly raped her.

The police alleged that Imonitie squeezed the victim’s neck and she became helpless before he pulled her pant and penetrated her.

After the assault, Imonitie dragged her out of the SUV and drove off.

The matter was reported to the police at Criminal investigation and intelligence section of the State CID, Panti, Yaba, Lagos.

Imonitie was trailed and arrested and interrogated during which he allegedly confessed that he had sex with her inside the SUV with her consent.

He was arraigned before the court charged with engaging in unlawful sex with the victim under the Criminal Code. But he pleaded not guilty.

The presiding Magistrate, Mr T Abolerinwa granted him bail in the sum of N500,000 with two sureties in like sum.

Metro See the man who repeatedly r-ped his daughter, then went ahead to abort for her (photos) – Ladun Liadi’s Blog